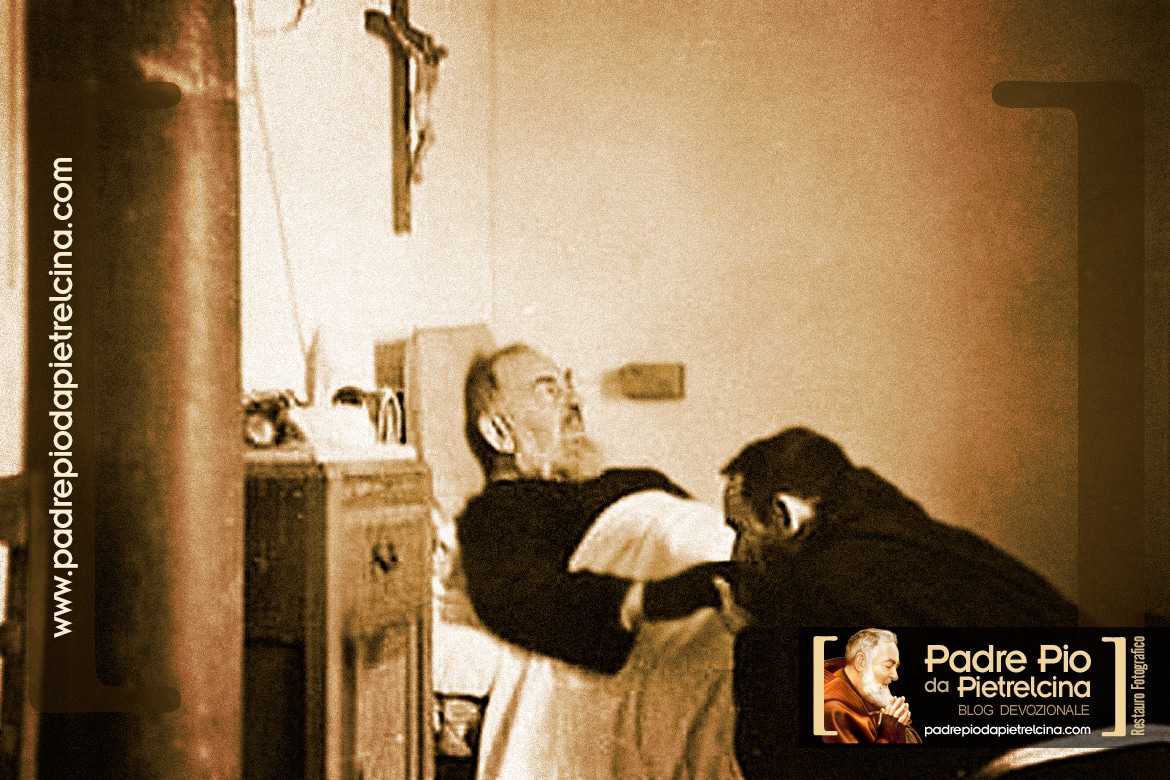 Padre Pio’s final night, right before his death, is described in a simple and moving way by Padre Pellegrino from Sant’Elia a Pianisi – Here is his account of the final hours of Padre Pio’s life.

Padre Pellegrino assured him that he had no need to worry for he still had a long time yet to live. Nevertheless, Padre Pellegrino added, “But if it is indeed near the time of your death, I ask you for a last blessing for the Brothers and for all of your spiritual children.” Padre Pio answered, “I bless them all and I ask you to have the superior give them this last blessing for me.” Padre Pio then said that he wanted to renew his religious vows. At these words, Padre Pellegrino grew frightened because in the Capuchin tradition, the only time the vows of religious profession are renewed is when one is on his death bed. Padre Pio was putting everything in order, down to the last detail. Padre Pellegrino listened as Padre Pio renewed his vows of poverty, chastity and obedience. Padre Pio said: “I, Padre Pio of Pietrelcina, vow and promise to Almighty God, to the Blessed Virgin Mary, to our Holy Father, Saint Francis, to all the saints and to you, Father, to observe all the days of my life, the Rule of the Friars Minor, confirmed by Pope Honorius, and to live in obedience, without property, and in chastity.” Padre Pellegrino spoke the response, “If you abide by this, on behalf of God, I promise you eternal life.” Padre Pio said that he could not breathe well in bed and wanted to get up. “Are there any stars in the sky tonight?” Padre Pio asked. “Yes, indeed. The sky is studded with stars tonight,” Padre Pellegrino replied. “Let us go to the veranda then and see,” Padre Pio said.

Padre Pio had severe arthritis and at eighty-one years of age, his posture was stooped and bent. Because it was very painful for him to walk, he used a wheelchair most of the time. But on this night for some reason, he was able to stand up straight and he walked briskly and with great ease, to the veranda, needing no assistance. To Padre Pellegrino, he suddenly looked twenty years younger. When Padre Pio got to the veranda, he reached over and turned on the light. That was something he had not done in so long that Padre Pellegrino could not even remember. He knew from personal experience that unusual things often happened in Padre Pio’s presence and he reasoned that this night was no exception. Padre Pio then began to stare intently at a particular area on the veranda. Padre Pellegrino could not understand what he was looking at with such concentration, but soon he would understand. He was staring at the exact place where the Capuchins would carry his lifeless body in just a few short hours. Suddenly Padre Pio began to feel very ill. He wanted to go back to his room but he was too weak to stand up. Padre Pellegrino quickly went to get a wheelchair. Meanwhile, all of the color had drained out of Padre Pio’s face and he was growing weaker by the minute. He began to repeat the words, Jesus . . . Mary . . . over and over. All the while, his voice was growing fainter. Dr. Sala arrived in less than ten minutes and realized that Padre Pio was having a severe bronchial asthma attack. He gave him an injection as well as oxygen in an attempt to ease his breathing which had become difficult and labored.

By that time, Father Mariano, Brother Bill Martin, Father Carmelo and the other Capuchins had gathered in Padre Pio’s room. Dr. Giovanni Scarale and Dr. Giuseppe Gusso soon arrived as well as Mario Pennelli, Padre Pio’s nephew. While the doctors were doing their very best to help Padre Pio, the Capuchins knelt down beside him and prayed the Our Father, the Hail Mary, the prayer for a holy death, and the prayer to St. Joseph, patron of the dying. Together, the Capuchins repeated, “Jesus, Mary and Joseph, I give you my heart and my soul. Jesus, Mary and Joseph, assist me in my last agony. Jesus, Mary and Joseph, may my soul peacefully expire in You.” The Holy Oils were prepared and Father Paolo gave Padre Pio the Last Rites. Padre Pio was fully conscious and was very much aware of all that was happening. His feet and hands were becoming very cold and he was perspiring heavily. When the doctors realized that he was having a heart attack, he was given an injection directly into his heart. With his eyes closed, he continued to repeat the words, Jesus . . . Mary . . . Toward the end, his lips formed the words but he could make no sound, not even a whisper. The Capuchins called out to him, “Padre, Padre!” He opened his eyes one last time and looked at his dear Brothers. At 2:30 a.m. with his Rosary clasped in his hands, Padre Pio gently bowed his head and died. Dr. Gusso, who had been present during Padre Pio’s final moments, stated that it was the most gentle and beautiful passing that he had ever witnessed. Padre Pio had lived a holy life and he had died a holy death.

PADREPIODAPIETRELCINA.COMSpiritual and Devotional Blog dedicated to Saint Pio of Pietrelcina. Padre Pio, Francesco Forgione, or also known as St. Pio of Pietrelcina, was born on 25 May 1887 in Pietrelcina and died on 23 September 1968 in San Giovanni Rotondo.