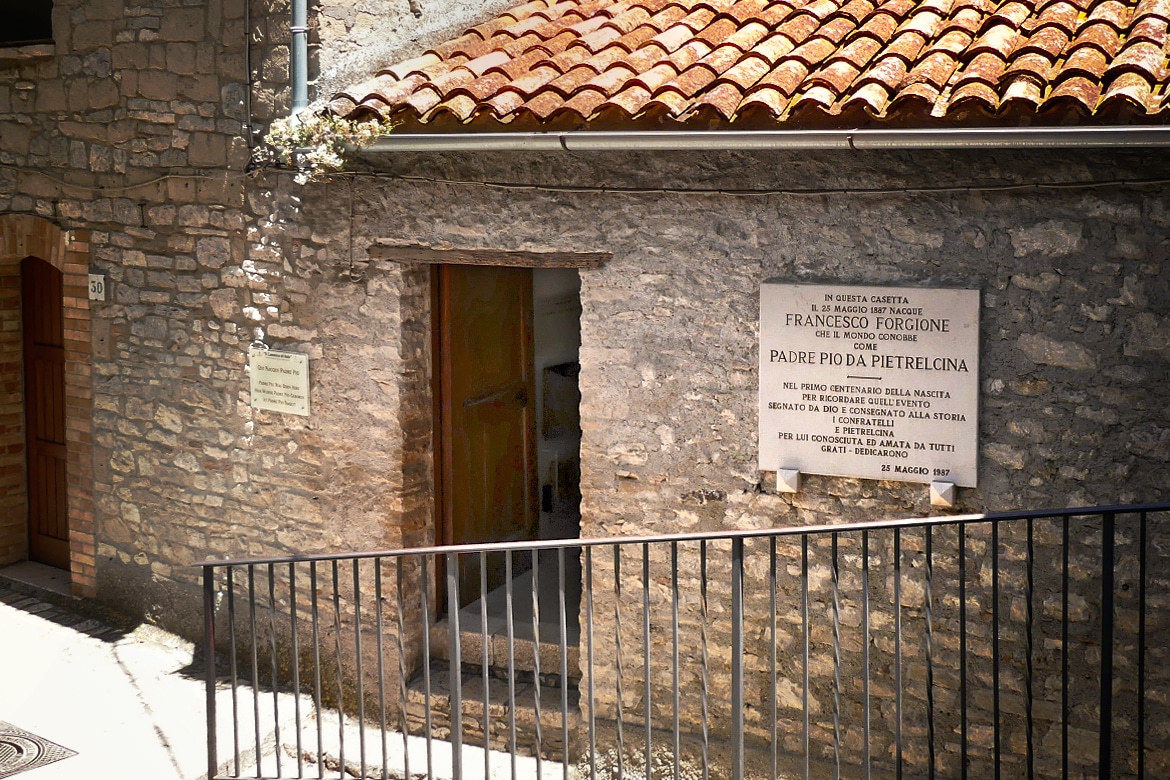 The home where Francesco was born is the paternal home of zi Grazio (his father) which can be found on 27, Vico Storto Valle a one room house, in which one enters by three steps from the outside, upon entering to the right, is a night-table and a double-bed sustained by battens in wrought iron and by iron feet; in front of the four pane window there is a very used washbasin and an antique chest, beyond a square table covered by a faded light carpet, on which are piled books which were used by Padre Pio when he went to school with his teacher Caccavo; in a modest frame is his photograph sent to his mother by a young lady from San Giovanni Rotondo. To the left of the entrance door is another antique chest, this together with two chairs, completes the furnishings of the brick, wood-beam ceiling room. On the wall, at the head of the bed, are four lithographs of the Madonna and two crucifixes. In the pavement there is a trap-door which brings one into a room below. This was used as a store-room and stable for the donkey. You can also enter this room from an outside door on the side of the house.

In this same alleyway in number 28 you can find another two small rooms rented out by his father Grazio. The first one is very modest, and was used as the family kitchen; here an old hearth remembers the winter evenings, with the burning logs and the figure of mamma Peppa. The second room was in the back of the kitchen and faced the well cultivated countryside and on the winding street which brings you to Piana Romana. This was the bedroom of Francesco and his brothers, and is the room where Padre Pio had his first supernatural experiences. From when he was small, Francesco, thirsty for sufferance and penitence, often slept on the floor, using a stone for a pillow.

The elderly of the town remember him as a well behaved and a diligent pupil at school, assiduous at church and silent and intent in prayer, kind and friendly with all even if he was discreet and pensive. His friend Francesco Orlando who was the same age describes him “with a small hunting jacket, made of wool, with a short cloak and always very clean and we loved him as a child”. Giovanna Iadanza tells of “when he was small, he already gave signs of being a saint: as he grew he was good, beautiful, intelligent and obedient and respected everyone and everyone loved him”. Lucia Iadanza tells us of when he was out in the pasture grazing the sheep how he would make crosses with small pieces of wood and would kneel down to pray, and with the rosary in his hand and would talk to us with kindness and with few words.