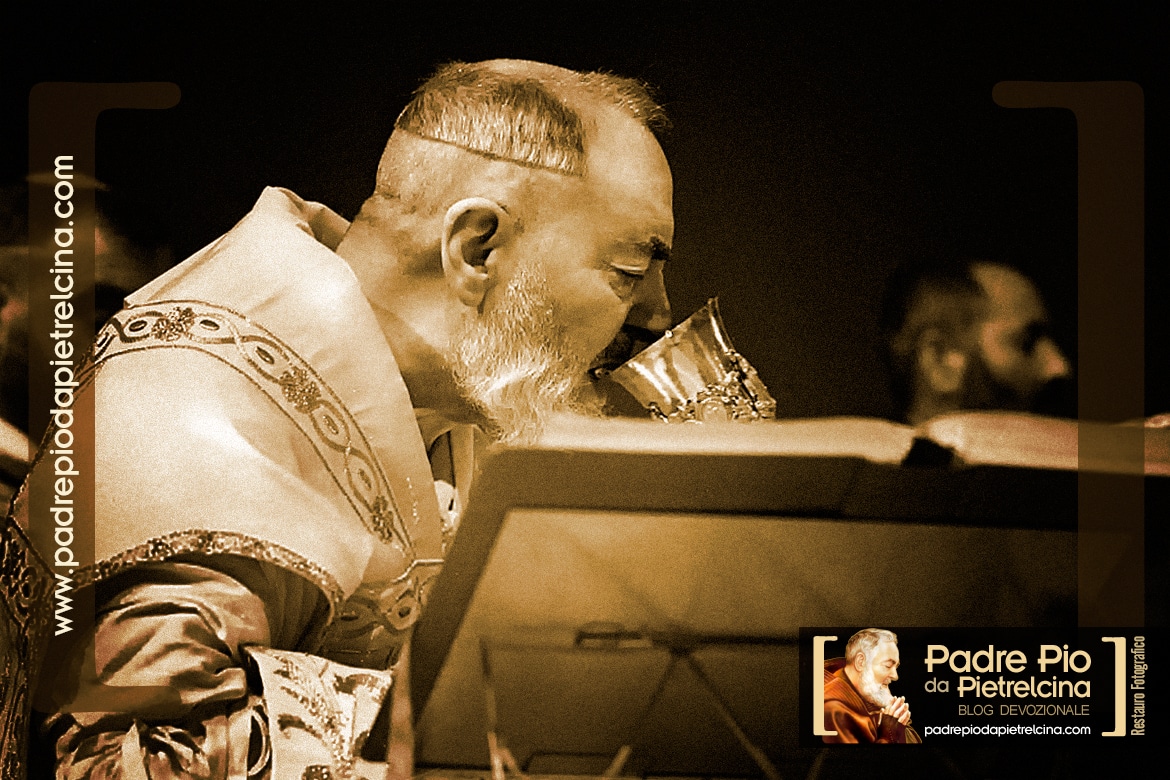 On August 10, 1910, Padre Pio is ordained a priest in the Cathedral of Benevento, Italy. The afternoon of that day, write this prayer: “Oh Jesus, my sigh and my life, I ask you to make me a holy priest and a perfect victim”. On the day of his ordination, his father was in America, but his mother, his brother Miguel and his wife, and his three sisters accompanied him on that special day. At the end of the Holy Mass, his mother and his brothers approached the railing to receive their first blessing. Her mother could not contain her tears, both of the emotion and of the pain of thinking about the absence of her husband, whose sacrifice had made possible the ordination of her son.
As was the custom, the new Father would celebrate his first Mass in the church of his town, in Santa Maria degli Angeli In the same church where he had been baptized 23 years before, where he had received First Communion and the Sacrament of Confirmation. The father used to tell his spiritual children “If you wish to attend the Holy Mass with devotion and obtain fruits, think of the Sorrowful Mother at the foot of Calvary”.
Back in Pietrelcina
The higher the young priest climbed toward perfection, the more he was stalked by the devil. And the more tormented he was by Satan, the more he grew in faith and love of the Lord. Shortly after his ordination, the fevers and ills that always afflicted him during his studies returned, and he was sent to his village, Pietrelcina, to recover his health.Each time an attempt was made to restore it to religious life within the monastery, it failed, as his health worsened. His priestly life in Pietrelcina included much prayer accompanied by many religious functions, as well as theological studies, catechism for the children of the town and meetings with individuals and families. During this period in Pietrelcina, his former teacher, the former priest Tizzani, was dying. His daughter, seeing him close to death, called Padre Pio to assist his father, who providentially passed by his house at that time. The dying man received from the Father the grace of God.
First appearance of stigmas
During his first year of priestly ministry, in 1910, Padre Pio manifested the first symptoms of stigmas. In a letter he wrote to his spiritual director, he describes them as follows: “In the middle of the hands appeared a red spot, the size of a penny, accompanied by intense pain. Also under the feet I feel pain. ” These pains in the hands and feet of Padre Pio are the first accounts of the stigmas that were invisible until 1918.
Once the pain that Padre Pio experienced was so acute, that he shook his hands, which he felt burned, to which his mother asked him: “What is that? Is that now you also play the guitar?” . The Father limited himself to not answering. This time in his hometown was a period of great spiritual combats with the devil, but also of great consolations through ecstasies and mystical phenomena, both internal and external, spiritual and physical. The demon used to appear in different ways. Sometimes he did it in the appearance of animals, of women dancing impure dances, of jailers who beat him and even under the appearance of Christ Crucified, of his Guardian Angel, Saint Francis of Assisi, the Virgin Mary, also under the appearance of your spiritual director, your provincial, etc. but after these assaults of the devil, he was consoled with ecstasies and apparitions of Jesus, the Blessed Virgin Mary, his Guardian Angel, Saint Francis and other saints.On August 12, 1912, he experienced for the first time the “sore of love”. Padre Pio wrote to his spiritual director explaining what happened: “I was in the Church doing my thanksgiving after the Holy Mass, when I suddenly felt my heart hurt by a dart of fire boiling in flames and I thought I was going to die”.
For seven years, Padre Pio remains outside the Convent, in Pietrelcina. Naturally, this life was in contrast to the Franciscan rule and some brother friars complained about this. It was then that the Superior General of the Order asked the Sacred Congregation of Religious for the exclaustration of Fr. Pio. It was a very hard blow for him and in an ecstasy he complained to San Francisco de Asís. The Congregation of the Religious did not listen to the request of the Superior General and granted that Padre Pio continue to live outside the convent, until his health was completely restored.
Back to monastic life
On February 17, 1916, Padre Pio left Pietrelcina for Foggia, where the superiors called him to give a spiritual service. Thanks to the prayers of Rafaelina Cerase, a very sick and close to death lady, Padre Pio can definitely return to community life. This good lady offered herself to God as a victim so that the Father could hear confessions and thereby bring great benefit to the souls.Although the Father could never return to Pietrelcina, his love for her never diminished. During the Second World War, the Father, referring to his people, said: “Pietrelcina will be preserved as the apple of my eye.” And before he died, speaking prophetically he said: “During my life I have favored San Giovanni Rotondo. After my death, I will favor Pietrelcina.”

The biography of Padre Pio: Seven years of sickness.

(january 1909) The year 1909 would be a particular and difficult year for the monk, who was assigned to different convents in hopes that the change of climate would better his health. Seeing that there was no improvement, at the beginning of May, Father Agostino of San Marco in Lamis accompanied him to Pietrelcina, to cure the sickness that was becoming more alarming.

(july 18th 1909) Pio was ordained deacon not at Montefusco but at Morcone.

(august 10th 1910) The long awaited day finally arrived. On the morning of the 10th of August in the cathedral of Benevento Padre Pio was ordained a priest by Monsignor Paolo Schinosi, he said his first Mass in the Mother church of Pietrelcina on the 14th of August.

(september 7th 1910) Under the elm tree of Piana Romana he received the first stigmas.

(october 1911) Seeing that there was no improvement, at the beginning of May, Father Agostino of San Marco in Lamis accompanied him to Pietrelcina, to cure the sickness that was becoming more alarming.

(december 6 th 1915) In December of that same year he was assigned to the 10th Health Corp in Naples.

( december 16 th 1916) A group of doctors examined him and diagnosed a pulmonary infection and gave him a year of convalescence.

(february 17 th 1916) After a year of convalescence at Pietrelcina, Padre Pio was introduced in the religious community of Saint Ann’s in Foggia. This orderly community had to learn to live with the diabolic forces that continually tormented Padre Pio in his cell during the night. His superiors ordered him, for the love of his fellow brothers of this community, to pray to Christ asking Him to stop these diabolic manifestations.